The Spring Showcase in San Francisco has come and gone, and we are finally able to talk with you about a plethora of things related to Season 3 of Killer Instinct. Let’s get right to it.

This year’s event was held in a small, black building which lacked windows, and was devoid of any real signage on the outside that signified this establishment wasn’t, in fact, what nightmares are made of. Once inside, though, it was apparent that the seedy appearance of this particular piece of architecture actually housed an incredible array of games set to come to Xbox One and Windows 10 this Spring. This showcase naturally included yours truly: Killer Instinct Season 3.

The above gallery will give you a glimpse in to what the venue looked liked as everything was set up. Not up to the challenge of looking at pictures? That’s fine. Let’s just say that there were masses of both Xbox One consoles, and Windows 10 PCs all loaded with games like KI, Gears of War Ultimate Edition, Ori and the Blind Forest Definitive Edition, and Minecraft. Setup for us was relatively simple, and Wednesday went by with a breeze. Killer Instinct Season 3 was ready to be Showcased.

Thursday morning started like any other, with Dave Lang, Adam Heart and myself all showing up to our location at the unholy time of 7:30 in the morning. Though you may believe we would be deprived of sleep and somewhat fatigued, the opposite was in fact the truth. There was news to be delivered, and we were its shepherds.

As press began to fill the venue, the staff were asked to wait outside as Phil Spencer would soon be getting on stage and starting his presentation. Half an hour later, we got our chance to interact with everyone, and our excitement reached a fever pitch. We’ve been clammed up for quite some time, slowly trickling out information like cold molasses from a bottle, so to be able to say so much at once was exhilarating. We were visited from some familiar faces, and after his talk was finished, Phil dropped by with Major Nelson & the Xbox UK crew to throw down on Season 3’s offerings.

As the day continued, Dave, Adam, and I divulged as much information about Killer Instinct Season 3 as we could to any and everyone at the event. We know you’re eager to learn everything you can, so we’ll let the editorial section of this piece come to a halt, and the information overload can commence!

Season 3 will launch with 4 characters – Rash, Kim Wu, Arbiter, and Tusk with additional characters rolling out as the season progresses.

There is a handy FAQ which you can see here: https://killerinstinct.prod.web.msgamestudios.com/windows10

Everything you own and have earned in Killer Instinct is available to you on Windows 10.

You can play Killer Instinct across Xbox One and Windows 10 devices using Xbox Live.

Xbox 360 fightsticks will work at Season 3 launch, with Xbox One fightstick support landing in a future Windows 10 update.

Now that you’ve got the juicy details for which you’ve longed, let’s get in to something a little more fun.

First and foremost you will notice that Shadow moves got a nice tweak. We’ve updated the visuals for every single Shadow move in the game as illustrated by Arbiter’s Shadow Mercy’s Demise below. We wanted to show this to you now, as you’re certainly going to see it in videos floating around later today.

Now let’s go ahead and get in to the characters coming with Season 3. Enjoy some nice screenshots, as well as clips from their gameplay.

Up until this point you’ve only seen Rash wearing his Retro outfit. Here’s what his current outfit looks like (Color 1).

Here are some more shots which you’ll see now that the Spring Showcase has come and gone. Rash in his Retro fit (Color 1).

You caught a look at Kim Wu during the KI World Cup in San Antonio, TX last month, but we still want to give you a look at some of the screens we shared this past week.

Her stage is gorgeous, and the progression that happens during the fight is fun to watch, as well. Fun fact – there is foot traffic on the street behind the blue van back there. May have blown my mind when I first saw it.

And now, of course…Kim’s Ultra.

We’re going to jump around for a bit. You’ve more than likely noticed that these characters are listed by reveal date, but instead of looking at Arbiter next have a little peek at Tusk.

You caught a glimpse of Tusk’s stage in the teaser dropped last week, but now you actually get to see it without hitting pause on your video player.

Tusk is HUGE! Don’t believe us? Ok here are a few more screens comparing him to Kim Wu and Spinal.

Now this is the part where we would normally show you his Ultra, however Tusk’s Ultra wasn’t in the build we brought to San Francisco. So to compensate, we’ll at least show you his intro.

And with that, let’s get to the final launch character.

By now you’ve seen Arbiter’s trailer, and there are plenty of action shots of him grabbed from YouTube. What you haven’t seen is a clean shot of Arbiter’s stage. So here is a capture of the beauty that is Sanghelios. 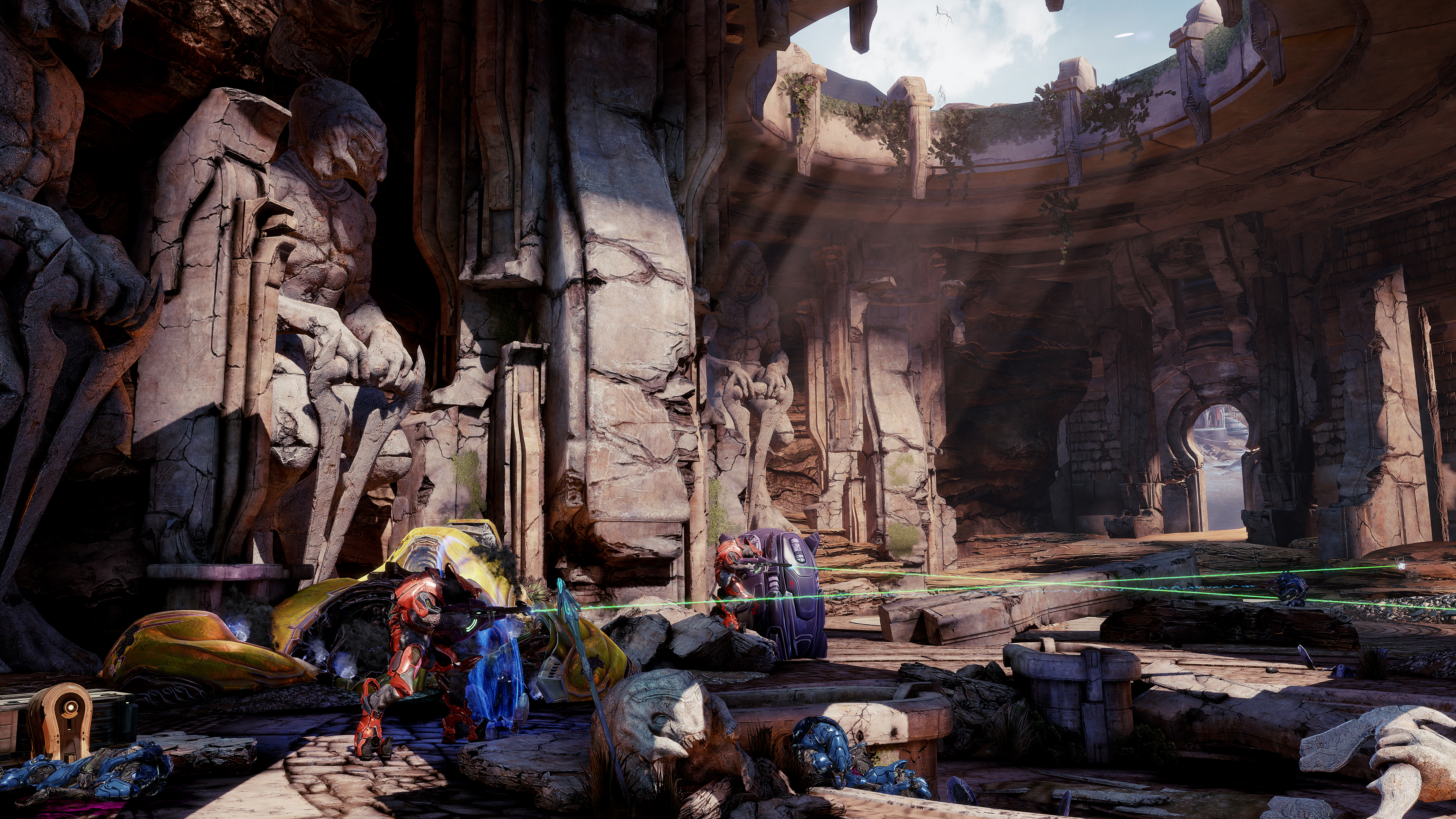 A few more shots with Arbiter taking on the Chief.

By now you’ve caught the drill… Here is Arbiter’s Ultra.

Just to reiterate, and really drive the point home. Killer Instinct Season 3 comes March 29th. We’ll have a ton going on between now and then, including live streams, character looks, and more. Before we completely head out, allow us to atone for not having Tusk’s Ultra ready to show you today. Arbiter’s Stage Ultra should serve as a nice replacement.

That will finally do it for us today. As of writing this, we are T-10 hours until the Arbiter live stream happens. We hope you enjoy this nugget of information, and like always we’d love to hear what you think in the forums. Until next time…